AFT President Randi Weingarten and Sen. Elizabeth Warren (D-Mass.) spoke March 6 at the Washington, D.C., launch of "Higher Ed, Not Debt," a new multiyear campaign advocating for affordable access to higher education for all, without the burden of debt or financial hardship. 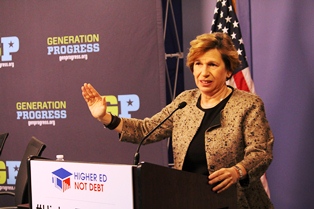 The AFT is one of more than 60 national and state-based organizations supporting the campaign. Others include Demos, Generation Progress, the National Education Association, Scholarship America, the Student Veterans of America, Jobs with Justice, Student Debt Crisis and the Working Families Organization.

"Higher education should be about expanding opportunity for the next generation, not a way for Wall Street and for-profit colleges to enrich themselves," Weingarten said. "We can no longer be a nation that tells our young people college is really important, while at the same time saddling them with crushing debt and slashing investments in the programs and supports that could enable them to achieve their dreams."

Warren said that student debt, which now stands at a staggering $1.2 trillion, is crushing our college students and dragging down our economy. "Our country should be investing in young people, not putting an additional burden on those trying to get an education," she said. "We need to work together to bring down the rising cost of college, and we need to help existing borrowers deal with their debt by allowing them to refinance their student loans at today's lower interest rates." 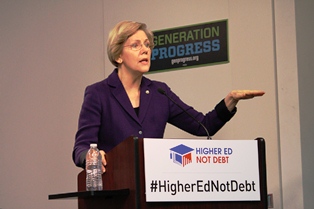 With Congress and state legislators failing to lead on this issue, the Higher Ed, Not Debt campaign will mobilize students, parents, borrowers and other advocacy partners to demand solutions, turn up the heat on policymakers and lenders, and advance the message that the time has come to restore the level of public support for higher education that was the formula for success for many previous generations.

In addition to remarks from Weingarten and Warren, the launch included a panel of other leaders in the campaign. Across the country, participating groups launched the effort with actions that will continue throughout the spring, including teach-ins, letter writing and Twitter town hall meetings. (Watch video of the launch event.)

Nearly 40 million Americans have had to rely on education loans to fund higher education, with more than two-thirds of graduates now carrying an average of more than $29,000 in debt. The country's current student debt total has topped $1 trillion, and if borrowing patterns continue, that amount will likely surpass $2 trillion by 2025. The default rate for federal loans is close to 15 percent and is on the rise, with little recourse for borrowers.

Through research, policy development, and online and offline organizing, as well as communications, polling and messaging, the campaign will provide critical support to current borrowers struggling with existing debt, address the causes of declining affordability and quality, highlight Wall Street's role in the privatization of higher education, and demand action on the issue of higher education debt across the country.