In a message to members following the June 10 court decision in Vergara v. California, AFT President Randi Weingarten and California Federation of Teachers President Joshua Pechthalt discuss the ramifications of the ruling and what the AFT is doing to fight back. They also are urging AFT members to sign a thank you card to California teachers to let them know you honor their commitment and courage.

"On Tuesday morning," they write, "teachers across California got up, went to their schools and dedicated their day to helping students learn and grow.

"While teachers led their classrooms, a judge in a Los Angeles courtroom said that for students to win, teachers have to lose.

"You've probably seen news about Vergara v. California. We want you to hear directly from us about how we're fighting—in California and across the country—to support students, protect teachers and tackle the real issues facing public education. 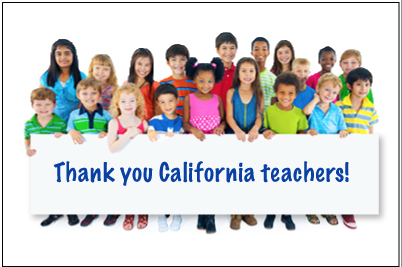 "Before we get into the details, it's important to take a moment to acknowledge the teachers in California's classrooms. Our opponents have spent months—and millions of dollars—vilifying California teachers to push a political agenda. So we want to start by telling teachers across California that we see their dedication, and we're grateful for their service.

"Sign our thank-you card to California teachers, and let them know you honor their commitment and courage.

"If we want every child to have a chance to thrive, we must retain and support a stable teaching force—especially in high-poverty schools. By attacking the rules that protect and support teachers, the Vergara decision destabilizes public education.

"Make no mistake: Last Tuesday was a sad day for public education. While the decision was not unexpected, the rhetoric and lack of a thorough, well-reasoned opinion are disturbing.

For example, the judge believes that due process is essential, but he ruled California's protections for teachers unconstitutional because he believes two years is not long enough for probation.

"The judge argues that no one should tolerate bad teachers in the classroom. We agree—and in many states we've reformed the process to protect teachers and ease the burden on schools. But in focusing on teachers who make up a fraction of the workforce, he strips the hundreds of thousands of good teachers of any right to a voice.

"In focusing on who should be laid off in times of budget crises, he omits the larger problem at play: full and fair funding of our schools so all kids have access to the classes—like music, art and physical education—and opportunities they need.

"The judge seems to think teachers are the core of the problem facing public education. We know that teachers hold our schools together, especially in the toughest times.

"Sadly, while the court used its bully pulpit to criticize teacher protections, there was no mention of funding inequities, school segregation, high poverty or any other out-of-school or in-school factors that have been proven to affect student achievement and our children.

"And perhaps worst of all, there is nothing in this opinion that suggests a thoughtful analysis of how these statutes should work, or lays groundwork for a path forward. Other states have found ways that don't pit teachers against students but instead lift up entire communities.

"This will not be the last word. As this case makes it through an appeal, we will do what we've done in state after state. We will work with parents and communities to fight for safe and welcoming neighborhood public schools that value both kids and the women and men who work with them. No wealthy benefactor with an extreme agenda will detour us from our path to reclaim the promise of public education.

"We're fighting back. When Secretary Duncan praised this flawed ruling, we publicly called him out for his mistaken views. We've been making our case in every form of media, all while gearing up to appeal the case in higher courts.

Stand with us in the fight to reclaim the promise of a high-quality public education for every child."

The message from Weingarten and Pechthalt also includes links to some fair, well-reasoned coverage of the case:

"Why the California Tenure Decision Is Wrong and Will Hurt Disadvantaged Students," American Prospect

"Making It Easier to Fire Teachers Won't Get You Better Ones," Los Angeles Times

"Why that ruling against teacher tenure won't help your schoolchildren," Los Angeles Times