Thousands come together for National Day of Action

The National Day of Action to Reclaim the Promise of Public Education brought together thousands of educators, parents, students and community members on Dec. 9 who attended more than 100 events around the country, despite challenging weather conditions in many locations. Tens of thousands more showed their support online.

Participants called on leaders to listen to those closest to the classroom about what's best for our children and for improving public education for all. "While we agree on the overall goal to prepare students for life, career and college, we also must be clear that the market-based approach has failed," AFT President Randi Weingarten says. "We need a new path paved with early childhood education, project-based learning, wraparound services, teacher autonomy, professional development, parent and student voices, fair funding formulas and more." (Read Weingarten's full Day of Action statement.)

This graphic shows the impressive reach of the National Day of Action.

Below are summaries from some of the day's many events. The full list of scheduled events is here.

Boston
AFT Executive Vice President Francine Lawrence joined stakeholders in a town hall conversation that explored a constructive, partnership-based agenda for strong public schools. Ensuring a community voice in the schools and support for students and educators were among the topics, and the forum offered an opportunity to promote community-driven solutions in schools, rather than privatization schemes. More than a dozen education and civic groups were involved in Day of Action events. The meeting was designed to welcome all voices; organizers plan to promote the community-developed Boston "Principles that Unite Us" statement and explore opportunities to work with elected officials to improve public schools in Boston.

Broward County, Fla.
Education technical and support staff in Broward County, Fla., joined teachers, community leaders, Broadway actors and even the Cat in the Hat in turning their National Day of Action into a celebration of public education for all kids. Sharing their love for reading, the educators gave hundreds of books to students at an elementary school in Fort Lauderdale. Joining the Broward Teachers Union were the Broward County Council of PTAs and the Children's Council of Broward County. Share My Lesson, a free online resource for teachers and support staff, provided a grant to help pay for the books. Teachers also received free Share My Lesson materials to help boost children's reading.

Chicago
Parents, students, educators and concerned citizens participated in a press conference and march to demand equitable funding for schools and a public voice in education. Participants delivered holiday cards to City Hall and sang customized Christmas carols that called attention to the destabilization of schools in communities of color. The rally and media event also addressed pervasive problems Chicagoans face in education: school closures, reckless expansion of charter schools and corporate profiteering, to name just a few. One of the locations included in the demonstration was the headquarters of Loop Capital, which makes $58 million annually at the expense of Chicago schools.

Cleveland
Efforts in Cleveland included a press conference and community forum to gain support for the PILOT (Payments in Lieu of Taxes) program to press the Cleveland Clinic, the city's largest nonprofit, to pay its fair share of taxes to help fund schools and wraparound services for students. The forum also called on Ohio legislators to restore the funding cuts they made to public education. 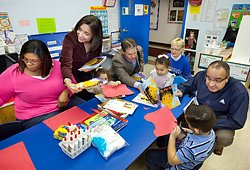 Members of the Corpus Christi AFT, along with business leaders and other community partners, joined AFT partner First Book to make their contribution to the National Day of Action by giving a free book to every Head Start student. The distribution is supported by a $3,000 grant from Citgo that was matched by First Book. In all, 29 Corpus Christi Head Start centers are each receiving a classroom set of 15 books, and about 1,300 Head Start students will each get their own book to take home and keep. "Corpus Christi teachers and education support staff are delighted to have the support of Citgo for this project," said Corpus Christi AFT President Raymond McMurrey. "We know how important a love of reading is."

Houston
Community partners, parents and members of the Houston Federation of Teachers held a rally and press conference at a school board meeting to urge board members to reclaim the promise of public education and stop the misuse of standardized testing. The participants also demanded that a fair teacher evaluation process be established.

Kansas City, Mo.
Kansas City's Day of Action featured labor and community activists, along with a church choir singing Christmas carols with lyrics changed to target the CEE-Trust, a pro-privatization entity that is currently writing a restructuring proposal for the city's school system. The proposal is expected to recommend the privatization of public schools. Carolers and other activists distributed cards asking members of the community to contact their state board of education representatives to urge them to oppose the corporate takeover of schools and to consider the negative impact of the CEE-Trust recommendations on public education. Rallying under such themes as "Public Schools Are Public Institutions" and "Strong Public Schools Create Strong Communities," a group of students, activists and a broad range of educators held a teach-in at the offices of one of the corporations whose tax breaks have helped lead to the underfunding of public schools. The Los Angeles Day of Action sought to draw attention to the need for full and equitable funding at all educational levels—from early childhood through college.

Miami/Dade County, Fla.
The Dade Coalition for Education and Economic Justice marked the Day of Action with a strong public call to end race-based achievement standards, the school-to-prison pipeline, and unfunded school mandates fed by high-stakes school testing. Parents, teachers, youth organizations and other groups that make up the coalition held a press conference outside the school board to call for fully funded schools and programs that are essential to ending the cycle of lost opportunity for the area's most vulnerable students. A broad cross section of groups joined teachers unions and educators for the event: high school alumni associations, the NAACP, local faith leaders and the Sant La Haitian Neighborhood Center, to name just a few.

New Mexico
Subfreezing temperatures weren't enough to keep citizens away from New Mexico's Day of Action, which was also the kickoff of an ambitious statewide bus tour. Supporters braved the early morning cold in Albuquerque and boarded a bus sporting a Reclaiming the Promise petition that New Mexicans from Gadsden to Gallup will be invited to sign. The five-day tour will end in Santa Fe, where the signature-adorned bus will be parked next to state legislative offices—a powerful reminder of grass-roots support for New Mexico's Day of Action to Reclaim the Promise of Public Education, which was backed by AFT New Mexico and nearly 20 education and community groups across the state.

Shanker Hall, named for the late AFT President Albert Shanker, was a fitting setting for the National Day of Action event in New York City. The United Federation of Teachers invited parents, students, activists and elected officials to its headquarters for a standing-room-only rally aimed at reclaiming the promise of public education in that district. "This is a pivotal time," said Michael Mulgrew, president of the UFT and an AFT vice president. "All across this country, public education is under attack. There has been a clear agenda to defund and destabilize public education. But enough is enough."

The event included performances by several public school bands, to both enliven the crowd and show what educators are able to accomplish with their students. In New York City, 12 years of billionaire Mayor Michael Bloomberg will end on Jan. 1, which Mulgrew noted is good news for public education in the Big Apple. But City Council member Letitia James, the city's public advocate-elect, reminded the group that this was no time for complacency even though Bill de Blasio, a progressive, was elected mayor.

"We need to see to it that his campaign promises are turned into policy," James said. And de Blasio can start, she said, "by appointing a schools chancellor who is an educator, not a business person." Zakiyah Ansari, advocacy director for the Alliance for Quality Education, hosted the event. "This is our moment to destroy the corporate environment that was on steroids under the Bloomberg agenda," she said. 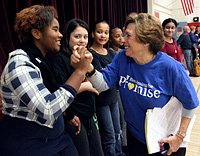 President Weingarten kicked off the National Day of Action with a visit to schools in Nyack, N.Y., where parents, community members, school staff and others gathered to discuss excessive standardized testing and problems related to the implementation of Common Core State Standards. She was joined by New York State United Teachers President Richard Iannuzzi, who is also an AFT vice president.

Philadelphia
Philadelphians poured into the streets to march for their schools as part of the city's National Day of Action event. Parents, students, educators, clergy and the community demanded that the governor restore more than $1 billion in cuts he has made to public education in the past year. They also insisted that investment firm Loop Capital give back the money it took from Philadelphia through bad loans, and that public education become a priority once again across Pennsylvania. "An equitable education funding formula must be a top priority for all of our leaders," said Jerry Jordan, president of the Philadelphia Federation of Teachers and an AFT vice president. "Public education is under attack and underfunded throughout America. Together, we can make sure our schools are places where all kids can thrive and the voices of those closest to the classroom are heard."

Pittsburgh
Pittsburgh students, their families, teachers and school staff endured bone-chilling cold in a rally outside Gov. Tom Corbett's office in the city. Participants gave the governor a failing grade for the more than $1 billion in cuts he has made to public education statewide just this year, and demanded that he restore the funding, which provides a gateway to opportunity for every child. In Pittsburgh alone, Corbett's cuts are costing students nearly $27 million per year. "Gov. Corbett has been a disaster for public education in Pennsylvania," said Nina Esposito-Visgitis, president of the Pittsburgh Federation of Teachers. "We've already had more than $2.4 billion in cuts to public schools and classrooms; I don't think we can survive another four years of Corbett."

San Francisco
A cross section of members of the San Francisco community came together for a candlelight vigil and march designed to draw attention to massive corporate tax subsidies and loopholes that are robbing the city's schools and colleges of much-needed resources and displacing families. Educators, joined by faith leaders, parents, students and community activists, marched down San Francisco's Market Street to demand that city and state officials take immediate steps to reclaim the promise of education, housing and democracy. Jobs with Justice, Chinese for Affirmative Action and tenants' rights groups were among the organizations participating in the march and vigil. 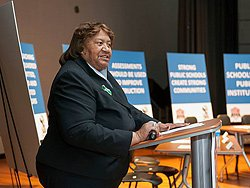 Close to 600 people packed a high school auditorium in Washington, D.C., to ask questions of the leading mayoral candidates and serve notice that the community is united behind "putting the public back in public education." Hosted by the community organization Empower DC and the Washington Teachers Union, the Day of Action event included remarks by AFT Secretary-Treasurer Lorretta Johnson, who said she was excited to see the community "demanding a new day for our children." WTU President Elizabeth Davis moderated a mayoral candidate forum where topics ranged from school closings and mayoral control of the schools to teacher evaluation and wraparound services.