A survey of nearly 5,000 educators released Oct. 30 by the AFT and the Badass Teachers Association shows that nearly two-thirds of educators usually feel stressed out, twice the level felt by workers in the general population. Most surveyed feel demoralized and disrespected by state and federal officials, especially Education Secretary Betsy DeVos. By contrast, educators in two school districts that have forged strong collaboration among educators, administrators, parents and community reported less stress and were less likely to leave the profession than educators in the broader survey.

In the "2017 Educator Quality of Work Life Survey,"4,000 educators responded to a public survey and 850 AFT educators responded in a random sample. The survey also oversampled members of the Solvay (N.Y.) Teachers Association and the North Syracuse (N.Y.) Education Association, which have strong collaborative labor-management environments. National stress data from the National Institute for Occupational Safety and Health was cited for comparison. 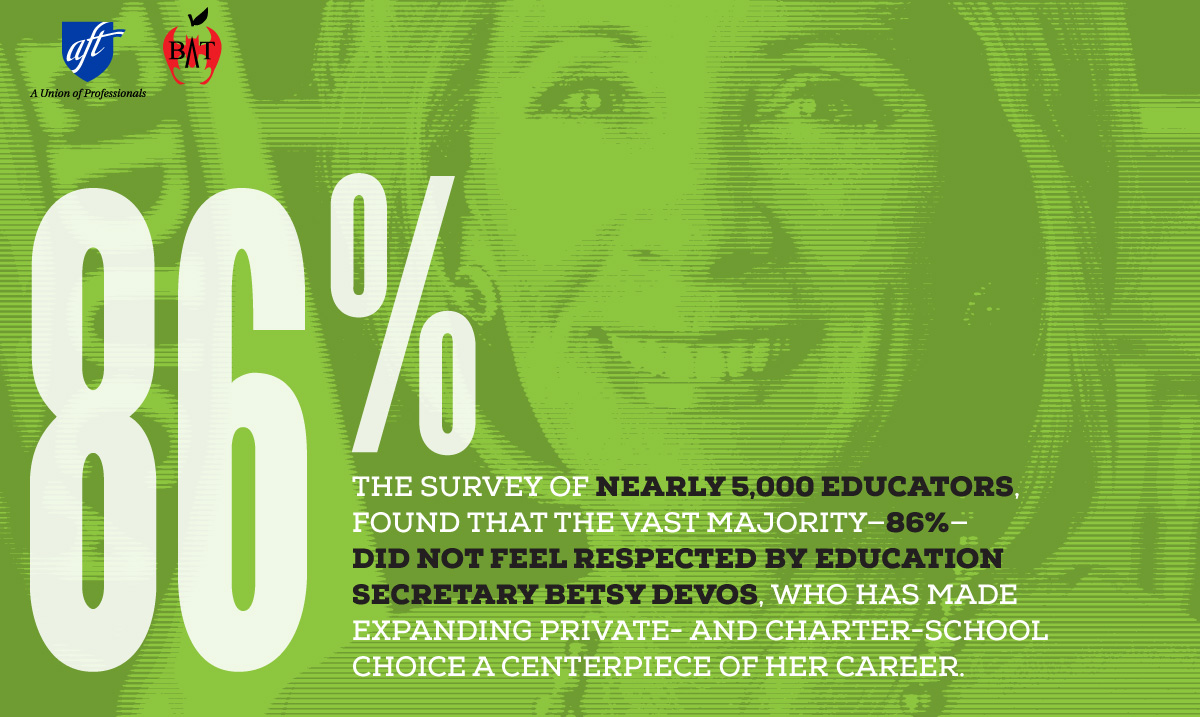 "Teaching is a tough job that carries with it high levels of stress, which obviously affects both students and educators. Stressful work environments can affect student achievement and educator effectiveness, and can be mitigated by a collaborative culture that respects educators and the work they do," says AFT President Randi Weingarten. "The survey shows that a supportive work environment is vital to creating schools that are places where teachers want to teach and kids want to learn. These kinds of environments do not come about by chance—they must be intentional."

Stress levels have climbed over the last two years. "Since President Trump took office, stress and anxiety are on the rise, and we now have a secretary of education whom educators in our survey overwhelmingly feel does not respect them. State and federal cuts to education spending will only make things worse," Weingarten says.

Marla Kilfoyle, executive director of the Badass Teachers Association, says: "Educators in America continue to report stress levels that exceed the national average. Educators work with our most valuable resource—children. We must continue to push for schools that respect educators and the work they do with our children. In supporting educators, we also support environments for children that are safe, happy and productive."

The AFT and the Badass Teachers Association conducted a survey in 2015 in which 30,000 educators reported often feeling emotionally and physically exhausted at the end of the day. They cited as the primary workplace stressors the adoption of new initiatives without proper training or professional development, mandated curriculum and standardized tests.

"Things have gotten measurably worse for teachers' mental well-being in the last two years, and it coincides with Trump's and DeVos's cruel and unrelenting disrespect for public schools and teachers. This is the opposite of what teachers need to meet the needs of their students," Weingarten says.

A study released by UCLA earlier this month shows that since Trump's inauguration, high school teachers are reporting an increasing problem of stress, anxiety and bullying among their students.

The first step toward reducing educator and student stress is to find out what is happening in our schools, and to build good, collaborative labor-management relationships, Weingarten says, adding that "top-down, mandated 'quick fixes' do not work. School districts, school communities and education unions can play a role in improving working and learning conditions."

Highlights of the 2017 survey include:

On amount of time feeling stressed: Nearly two-thirds, or 61 percent, of educators find work "always" or "often" stressful, twice the rate of other workers.

On being bullied, harassed or threatened on the job: 27 percent of educators said they have been threatened, bullied or harassed, versus 7 percent of employed adults in the general population. When asked who was the bully, 35 percent identified a principal, administrator or supervisor, and 50 percent said it was a student.

On respect: Educators felt most respected by their co-workers, students and students' parents—the people with whom they interact daily—and felt most disrespected by DeVos (86 percent), the media (61 percent) and state and federal elected officials (59 percent).

On control and influence at work: Educators said they have at least a moderate level of control over basic decisions in their classroom, but they report having far less influence over policy decisions, such as establishing curriculum (nearly 40 percent), professional development content (nearly 50 percent) and budget decisions (nearly 80 percent).

Weingarten notes that 34 states still spend less on education than before the beginning of the recession in 2008. DeVos has proposed cutting the federal education budget by $9 billion.

The two local unions and their school districts have forged strong collaborative labor-management relationships. Both focus on developing good supports for teachers, including peer mentoring programs, especially for new teachers. Educators said these programs and respectful supervisors decrease the likelihood of very stressful work, increase the likelihood of feeling comfortable bringing up and addressing problems, and make them feel more enthusiastic about their jobs.

On respect: 67.5 percent of Solvay teachers and 54.8 percent of North Syracuse teachers strongly agreed that their supervisors treated them with respect, compared with less than half in the broad survey.

"Collaboration doesn't eliminate all of a district's problems, but it does enable everyone connected to a school to develop processes that lead to joint solutions to problems, creating a sense of shared responsibility and agency. High levels of stress undermine the ability of schools to be safe, welcoming and healthy places for educators, students and community," Weingarten says.

A national AFT poll of parents released earlier this year found that parents want well-funded neighborhood public schools that are safe and welcoming, help children develop their knowledge and skills, and ensure equal opportunity for all kids.