Millions of borrowers with crushing student loan debt could benefit from an executive order President Barack Obama signed at the White House June 9. The order broadens eligibility for the administration's Pay As You Earn program, and will allow up to 5 million borrowers to cap monthly student loan repayments at 10 percent of their discretionary income, forgiving any unpaid debt after 20 years. 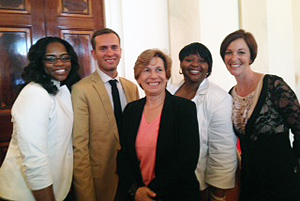 The new plan folds in borrowers who took out loans before 2007, such as Federal Family Education Loans, or who stopped borrowing by October 2011. These borrowers had been excluded under a 2010 law. (See a White House fact sheet on the changes.)

Thousands of AFT members could benefit under the plan, says AFT President Randi Weingarten, who was at the White House for the announcement. Four of those members stood by and beamed as the president delivered his remarks in the East Room and signed the executive order.

Yvette Levy is a pre-K teacher in the St. Louis Public Schools who has two master's degrees in education and $66,000 in debt. Robert Geremia is a high school teacher in Washington, D.C., who earned his master's degree during three consecutive summers in New York City at Columbia University's Teachers College and owes $37,000. Tenelle Chambers, a paraprofessional working in Baltimore, took out loans for every year of her undergraduate education and struggles to make her repayments, which will total $60,634 when she is done. Melanie Zinn, from Vernon, Vt., attended numerous colleges from 2000 to 2009, finding her way to her calling of teaching, only to lose her teaching job three months after completing her master's. Now she runs her own education business and faces a total education debt of $93,117.

"At a time when higher education has never been more important, it's also never been more expensive," Obama observed, speaking of his passion on the topic, fed by his own mother's sacrifice for the dream of sending her children to college and his experience paying for undergraduate and law school. He stressed his conviction that the U.S. government must do more to help low-income and middle-class families take advantage of the opportunities available to their parents' generation.

"I just came back from Normandy, where we celebrated D-Day. When that generation of young people came back from World War II, at least the men, my grandfather was able to go to college on the GI Bill. And that helped build the greatest middle class the world has ever known.

"… Neither Michelle nor I came from a lot of money, but with hard work, and help from scholarships and student loans, we got to go to great schools. We did not have this kind of burden that we're seeing, at least at the undergraduate stages. Because of law school, we only finished paying off our own student loans just 10 years ago. So we know what many of you are going through or look forward—or don't look forward—to."

We are dedicated to fight forward with @BarackObama and @SenWarren on student loan reform http://t.co/w9gO6vFNOv

Also present at the announcement were members of Congress, most notably Sen. Elizabeth Warren (D-Mass.), who has just introduced a bill on the floor of the Senate, the Bank on Students Emergency Loan Refinancing Act. The bill would allow those with outstanding student loan debt to refinance at the lower interest rates currently offered to new borrowers. (See related story.)

"This action is just one step in the right direction. Now is the time for lawmakers in Washington to join the president in pushing for more student loan reform, including the passage of Sen. Warren's bill allowing students to refinance their federal and private loans. We must reclaim the promise of higher education by making college affordable and accessible to all Americans."

To cap the White House’s focus on higher education, President Obama did his first-ever Tumblr event on June 10, and the topic was student loans.