From grass-roots lobbying on Capitol Hill to a telephone town hall meeting, the AFT focused intense activity and energy in the first days of March on the all-important reauthorization of the keystone federal law for K-12 education, the Elementary and Secondary Education Act.

More than 40 AFT leaders from 19 states traveled to Washington, D.C., on March 10 and urged their senators to preserve essential ingredients and advocate for necessary changes in ESEA (known in its current version as the No Child Left Behind Act). The next day, ESEA reauthorization commanded major consideration at the regular meeting of the AFT Teachers program and policy council and, later that evening, was the focus of a telephone town hall meeting that drew more than 4,000 activists and classroom educators from states across the nation. 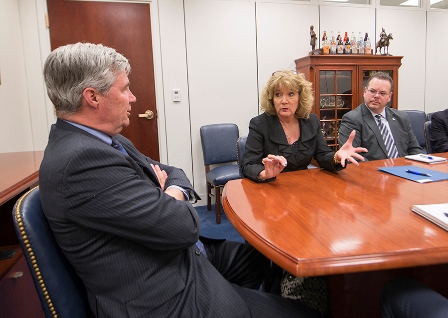 In all of these actions, union leaders and activists highlighted the need for ESEA to stay true to its basic mission—leveling the playing field for all children in public schools, particularly those living in poverty—while providing educators with the conditions and resources necessary to meet that great challenge.

The visits connected the face and voice of classroom educators with AFT priorities for ESEA reauthorization. Among those goals: to relieve the pressure of high-stakes tests, ensure that struggling schools receive the interventions that will allow them to succeed, maintain paraprofessional qualification requirements in the law, and embrace strategies that don't turn the federal government into the human resources department for every school district. The AFT activists also urged lawmakers to expand access to high-quality early education and to maintain ESEA's original purpose of fiscal equity—keeping resources focused on schools with high concentrations of student poverty and maintaining support for key subgroups, such as English language learners.

"These were engaging and informed conversations," Colleen Callahan, professional issues director for the Rhode Island Federation of Teachers and Health Professionals, said of her lobby day visits with Sens. Jack Reed (D-R.I.) and Sheldon Whitehouse (D-R.I.). Her off-record talks with the two Rhode Island Democrats touched on many core issues tied to ESEA—particularly accountability, equity and the impact of testing in education—and she found both lawmakers to be approachable and open to the ideas and concerns of those closest to the classroom. "One of the big points I tried to make was that we can have accountability in education without a manic focus on a single test."

Callahan was joined by Ronald Beaupre, president of the Pawtucket (R.I.) Teachers' Alliance (shown above with Sen. Whitehouse). Beaupre explained how Pawtucket schools and other systems serving low-income neighborhoods were already losing millions to state strategies that simply let dollars follow individual students with no regard to concentrations of poverty. That problem will be compounded, he warned, if Congress changes ESEA funding to reflect a similar strategy called "portability." 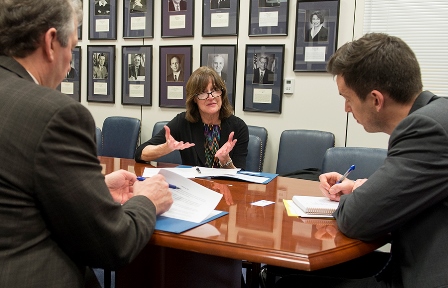 Jesse Sharkey, vice president of the Chicago Teachers Union, talked about the deadening effects of overtesting during his visit to the office of Sen. Mark Kirk (R-Ill.). "Something has to be done to curb the intrusion of standardized testing," he said. "It's driving out instruction. You lose 20 to 25 days of instruction per year."

Paraprofessionals and school-related personnel were well-represented in the lobby day activities. They explained the necessity of preserving ESEA language requiring that all paraprofessionals be highly qualified and attain certain levels of professional development and certification, such as college credits or equivalent exams.

In the office of Sen. Bill Nelson (D-Fla.), paraprofessional Dien Forbes, a member of United Teachers of Dade who works with students with disabilities, said she has used every bit of her training in behavioral therapy, bilingual skills and autism to help students learn. She expressed hope that PSRP training and professional standards will continue under ESEA.

Alfreda Martin, a preK-kindergarten paraprofessional also from United Teachers of Dade, described how the teacher in her classroom went out on maternity leave for three months and was replaced with three different substitutes. "By me being the para, knowing the students and knowing the curriculum, it went smoothly," Martin told a Senate staffer. "You need a highly qualified paraprofessional."

Follow-up is critical
These visits, combined with follow-up both in Washington, D.C., and back home, will be critical in the weeks ahead. Leaders in the Senate are expected to propose a bipartisan draft of the bill early next month, while the House of Representatives could vote any day on a draft. Differences between the two bills would then need to be ironed out in joint committee before a bill is offered to the White House—making a critical window of opportunity for classroom educators to communicate with lawmakers not just at the Capitol but back home in early April, when Congress is in recess.

The telephone town hall provided thousands of activists with breaking news on ESEA reauthorization and then allowed them to put that information to work immediately. At the conclusion of the event, many of the participants took a moment to patch their phone connection into the offices of their senators—leaving messages that highlight what public schools' front line demands from a new ESEA for the profession and the students they serve.

These types of calls, letters, emails and visits have a big impact on Capitol Hill, AFT President Randi Weingarten told the town hall crowd. They can help the union seize this opportunity to fashion a good new law and escape the arbitrary and punitive climate that has been driven by NCLB waivers and Race to the Top incentives. "I thank you for wanting to make a difference in the lives of children and for standing up for the respect and dignity you deserve," she told the audience.

[From staff reports/photos by Michael Campbell]